We believe  in the power of mother nature. We take great care in nurturing our land so that everything we grow is treated as the earth would have intended; using all natural components in our soils along with utilizing seasonal climate and weather conditions to grow thriving, robust crops. We believe that taking the time to properly nurture and pay attention to our stalks, we can work with the plants themselves to continually breed cultivars that are high in medicinal benefits. By taking good care in our land, we are also committed to growing a variety of beneficial herbs that sustain the farm, employ even more farmers, and are used in our formulations. Thus, we really believe in a holistic approach to our practices and products.

We believe in plant science. Great care is taken in planning our harvest to grow genetics which yield a variety of cannabinoid profiles so we can use CBD, CBG, CBN and Terpenes from our own crops. Our uniquely established extraction methods maintain a constituent profile in our output that is complementary to the hemp in its natural state. Thus, we are able to control the purity of our raw material compounds.

We believe in the efficacy of our products. In everything that we do, we hold the intention of our formulas in high regard, and work to preserve the properties of the hemp and the ingredients we pair it with so that our products give results. By taking so much care in our agriculture and extraction, we retain ingredients we are truly proud of.

We believe in empowerment. By creating products that are nature made, holistic and sustainable along with education of the science behind them, we are able to empower consumers to make informed decisions on their well being. We understand that each consumer has a choice to use CBD and other plant based products, and by creating Greenfield Groves brands, we offer a good one.

Despite a long history of beneficial medicinal and industrial use of hemp across the world, a “taboo culture” towards marijuana and cannabis began in the early 20th century. When the once meaningful (and mandatory) American crop began to slow down in the 1800s, the use of hemp and marijuana became associated with Mexico and other Latin and West Indian immigration. This perception was followed shortly thereafter with taxation, bans and propaganda films such as  “Reefer Madness” from 1936.

From there, both hemp and marijuana became mostly associated with hippie culture and anti-establishment. Despite the findings that Marijuana did not pose a widespread danger to society as per a congressional report in 1972, Nixon continued his ‘War on Drugs’ with his formation of the DEA and the plant remained demonized.

In 1992, the discovery of the endo-cannabinoid system was discovered in Jerusalem and new light was shed on the powers of the cannabis plant.  Since then, a stream of new research has uncovered the way that various cannabinoids interact with our bodies with much uncovered about the multitude of benefits of the plant.

These scientific revelations along with the loosening laws on Marijuana and the legalization of hemp through the 2018 Farm Bill has put CBD, into the mainstream as a form of plant medicine. On-going research and exploration of all the additional properties that can be extracted from this incredible plant will only continue to increase in years to come.

A TIMELINE OF INDUSTRIAL HEMP USE: 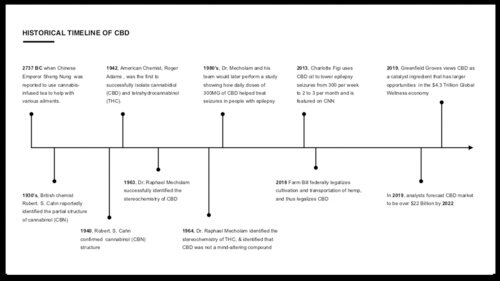 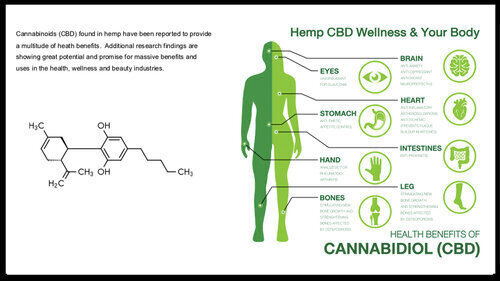 Produced at the maturing state of plant growth, CBG (cannabigerol) is sometimes referred to as “the mother” as it acts like a stem cell from which other cannabinoids are formed. This compound only makes up a small percentage of the overall plant constituents found in hemp, and must undergo a specialized extraction process. Even so, with promising research that is still in its infancy, the potential benefits of CBG are quite extensive and thus worth the specialized grow and extraction.

CBN is a compound that is produced by the plant towards the end of its grow, after the production of the flower, when the plant moves towards dormancy. This is important, as it is actually the breakdown of THC from a fully mature plant that is exposed to natural UV that turns into CBN. Just like its “dormant” nature in phase of plant growth, CBN is shown to give similar effects in its interaction with the Endocannabinoid system, with potential sedative effects as a sleep remedy.

Aside from cannabinoids, cannabis plants contain constituents called terpenes, which are known to be a plants inherent defense mechanism to ward off predators and attract pollinators. Terpenes are not only responsible for the distinct smells produced by a variety of plants (and present in essential oils), but also have potential health benefits. Terpenes are extracted separately from cannabinoids.

While there are over 20,000 known terpenes, cannabis plants specifically contain more than 100 distinct terpenes. Some of the most abundant terpenes known to be found in cannabis plants include:

THE MYTHS VS. REALTIES OF CBD

As CBD becomes more mainstream, there’s still a lot of education that is needed.  There continues to be confusion about CBD and marijuana so here are some common myths vs. realities of CBD. 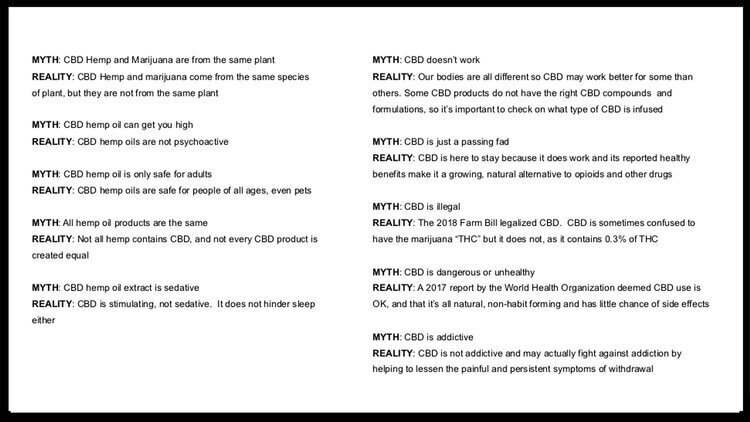 Hope You Enjoyed the Read!

Lindsay is an entrepreneur, influencer, and advocate with a passion to help women and their loved one’s thrive beautifully.

Provide your email to get exclusive access to our research, product development and timely information on how to keep control of your health as our society continues to evolve.

Thank you for providing your email address.
Please check your inbox to confirm your interest in receiving timely information from the Lindsay Giguiere.

We use technology, such as cookies, to improve site functionality, personalize content, and analyze web traffic. By clicking “ACCEPT” you also allow us to share this information with third party partners.
ACCEPT
Manage consent

This website uses cookies to improve your experience while you navigate through the website. Out of these, the cookies that are categorized as necessary are stored on your browser as they are essential for the working of basic functionalities of the website. We also use third-party cookies that help us analyze and understand how you use this website. These cookies will be stored in your browser only with your consent. You also have the option to opt-out of these cookies. But opting out of some of these cookies may affect your browsing experience.
Necessary Always Enabled
Necessary cookies are absolutely essential for the website to function properly. These cookies ensure basic functionalities and security features of the website, anonymously.
Functional
Functional cookies help to perform certain functionalities like sharing the content of the website on social media platforms, collect feedbacks, and other third-party features.
Performance
Performance cookies are used to understand and analyze the key performance indexes of the website which helps in delivering a better user experience for the visitors.
Analytics
Analytical cookies are used to understand how visitors interact with the website. These cookies help provide information on metrics the number of visitors, bounce rate, traffic source, etc.
Advertisement
Advertisement cookies are used to provide visitors with relevant ads and marketing campaigns. These cookies track visitors across websites and collect information to provide customized ads.
Others
Other uncategorized cookies are those that are being analyzed and have not been classified into a category as yet.
SAVE & ACCEPT